Why Choose Coast to Coast?

Coast to Coast Painting customers choose us (and keep coming back to us) because of our capabilities, but they also appreciate the relationships we build. There’s really nothing complicated about our formula for success and satisfaction — it’s based on five old-fashioned qualities that matter more than ever today: 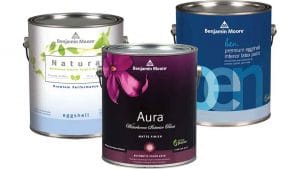 We use Benjamin Moore paints that either have no volatile organic compounds (VOCs) or contain very low levels of them. This is important because VOCs are solvents that get released into the air as paint dries — and they can cause symptoms including headaches and dizziness. Today’s low- and no-VOC paints are far superior to older environmentally friendly products, so we don’t have to sacrifice quality to maximize safety.

We also recycle and reuse materials as often as possible, including papers, plastics, rollers and more. Our leftover paint is donated to people in the community, including artists and schools.

The history of Coast to Coast Painting

At an early age, Lewis Johnson learned the diligence and skill required to produce superior results in all facets of construction and painting. He began his career in 1995, working for a custom-home builder while attending Delaware County Community College in his hometown of Media, Pennsylvania.

Lewis was soon hired by a private contractor specializing in home remodels, and developed a passion for putting the fine finishing touch on each project — a passion that made it clear his future was in painting. After working under seasoned professionals at several established companies in both his hometown and Seattle, where he moved in 1999, Lewis launched Coast to Coast Painting in 2003.

The Coast to Coast name was inspired by that cross-country journey, but it also stems from the reputation Lewis has earned for quality and service. Clients in Pennsylvania sought him out for projects even after he moved to Seattle, going so far as to fly him across the country — “coast to coast” — to work for them.

That reputation for integrity and superior workmanship has grown even stronger over the years. Lewis has cultivated a wide client base of both residential and commercial customers, many of whom have chosen Coast to Coast for multiple projects.

Every project Coast to Coast takes on is unique, with its own set of demands and challenges. Our fundamental approach, however, remains constant. We will always:

"You guys are a pleasure to have around."

"Lewis, Thanks so much — you guys did an AMAZING job and I love it! I'm so excited! Thanks again!"

Things to consider when selecting a painter:

Knowing Paints, Products, & How to Apply Them

As with anything in life, you get what you pay for. If you want high quality, great craftsmanship, reliable service, and respect for your home and environment, be willing to pay the price that comes with it. Remember that "Cheaper Doesn't Always Mean Better!

Price - Be a Smart Consumer

As with anything in life, you get what you pay for. If you want high quality, great craftsmanship, reliable service, and respect for your home and environment, be willing to pay the price that comes with it. Remember that "Cheaper Doesn't Always Mean Better!

Tough economic times force all of us to "watch our budget." We will work with you to deliver the highest quality job at a reasonable price.

Think before going the "lowest price" route. You potentially expose yourself to shoddy work, unprofessional workers, low quality and an unsatisfactory finished product. Chances are you'll spend more to have the work redone.

By choosing a licensed, bonded, and insured painting contractor, you are doing the right thing. We pay our full state and federal taxes, unemployment, labor and industries, and full insurance. This not only protects you the client, but protects our employees, and stimulates our economy.

Contact us today for a fair and comprehensive FREE written estimate.

Your paint job is only as good as the surface preparation. By using the proper sanding equipment, we properly prepare the surface to a solid substrate before priming, sealing, painting, or staining.

Preparation and painting can be difficult, challenging, dangerous, and hazardous work. We deal with ladders, planks, dust containment, paints, and solvents. By hiring a professional painting company such as Coast to Coast Painting Plus, means you don't have to worry about these onsite issues.

Always make sure the person or company you're hiring is fully Licensed, Bonded, and Insured. At Coast to Coast Painting we will gladly supply you with all of our current insurance and license information and provide you with links to help you through the process.

Nothing is worse when we are working with other trades or when you've hired a contractor and they leave jobsite trash, leftover paint buckets and paint debris, solvents, coffee cups, whatever. When you hire Coast to Coast Painting we know how to handle and deal with paint leftovers and properly contain and recycle hazardous waste that can be part of the job. We practice onsite cleanliness and strive for a clean jobsite daily and at the end of the project as well. We properly dispose and recycle all of our jobsite waste so you don't have to worry about it. You shouldn't have to worry about it!